Captain Hepburn and his eight kids…

The original owner of Picnic Island was Captain Robert Hepburn. Born in 1782 he had an adventurous life as a sea captain. In 1828 he had a bit of a mid life crisis and decided to move with his wife Jacobina (Jacobina?!), his three sons and five daughters to Van Diemen’s land.

As you do when you arrive in a new land, within 10 days of arrival he obtained a location order for 2560 acres of land at Roys Hill. While his family was very happy to be on dry land after the long voyage, they found the land was infertile (unlike Rob and Jacobina) and they applied for a secondary grant, claiming that Roys Hill was “suitable for nothing but garden walks”.

So in 1829 he was granted 500 acres on the coast around Coles Bay, including Picnic Island (which he wanted as a breakwater for his boat).

With the help of his convict labour he build a sandstone house in nearby Swannick (which you can still see on the way out of Coles Bay if you drive almost to the beach, on the right hand side of the road). It was constructed from sandstone mined on Picnic Island, the only place in the region where sandstone is found (most of the region is granite).

Meanwhile Hepburn’s arch nemesis, George Meredith was running his whaling station at the Fisheries at the base of the Hazards, across the bay. When the whales weren’t running he would send his convicts out to Picnic Island to pinch Captain Rob’s sandstone. He too wanted a fine sandstone abode. A legal fight ensued and George had to stop quarrying on Picnic Island.

So this was the local legend when I came on the scene and started camping on the island. The spot I would pitch a tent (and later a tiny shack) was a depression cut into a cliff with mounds of dirt providing some protection from the wind. I figured this must have been the quarry but had no proof until I started digging the footings for the new building. What I discovered was a beautiful rectangular sandstone block with all the pick marks created by some convict over 200 years ago.

Very exciting. Probably the most exciting thing I have ever found. I suppose it might have been a block that got buried and forgotten, or perhaps the boat was so laden it was left behind for the next trip which never eventuated. It now sits as a hearth under our fireplace.

Having transported tonnes of material I have great respect for these convicts who somehow cut the sandstone into perfect blocks by hand and then carried them off the island. Could have done with this sort of help during our construction and transportation of materials. 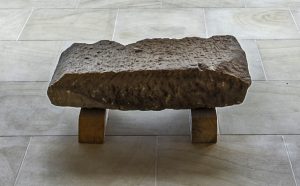